The first certain data of the existence of the “Spazzolifico” in Vittorio Veneto dates back to the 1920 book by Lucio Bologna in which the “Spazzolifico” is mentioned as one of the most flourishing industrial activities in the town of the Veneto foothills.

The “MANIFATTURA VENETA SPAZZOLE” of Vittorio Veneto was the secondary seat of a Piedmontese industrial reality dedicated to the manufacture of brushes of various types, owned by a noble Piedmontese family.

Those were the times of the Italian and Venetian industrial revolution in particular: in Vittorio Veneto the factories were all along the Meschio, a river with crystal clear waters that runs through the city and that supplied the companies with the electricity needed for production activities: the river flowed right under one of the “Spazzolificio” sheds, in a particularly suggestive environment.

Before the Second World War, the Spazzolificio had over two hundred employees and there was no family where at least one member had not worked “on the brushes”.

The machines were few and most of the processes were carried out by hand and this justifies the large number of people employed.

Since at the Spazzolifico were also produced brushes for cleaning rifles and cannons, the same was classified as a “war industry” and, DURING THE Second World War, was therefore heavily bombed in its central part, which was completely destroyed.

The activity continued between ups and downs until, in the sixties of the last century, it was taken over by Cav. Flavio Perin, then head of the company’s administrative sector. It thus became “SPAZZOLIFICIO VICTORIA” but, despite being the years of the economic boom, the primary needs were other … and therefore the brush market was still a limited and “poor” market, which did not allow great gains and therefore not even the necessary technological investments to save the many processing steps that the brush requires. 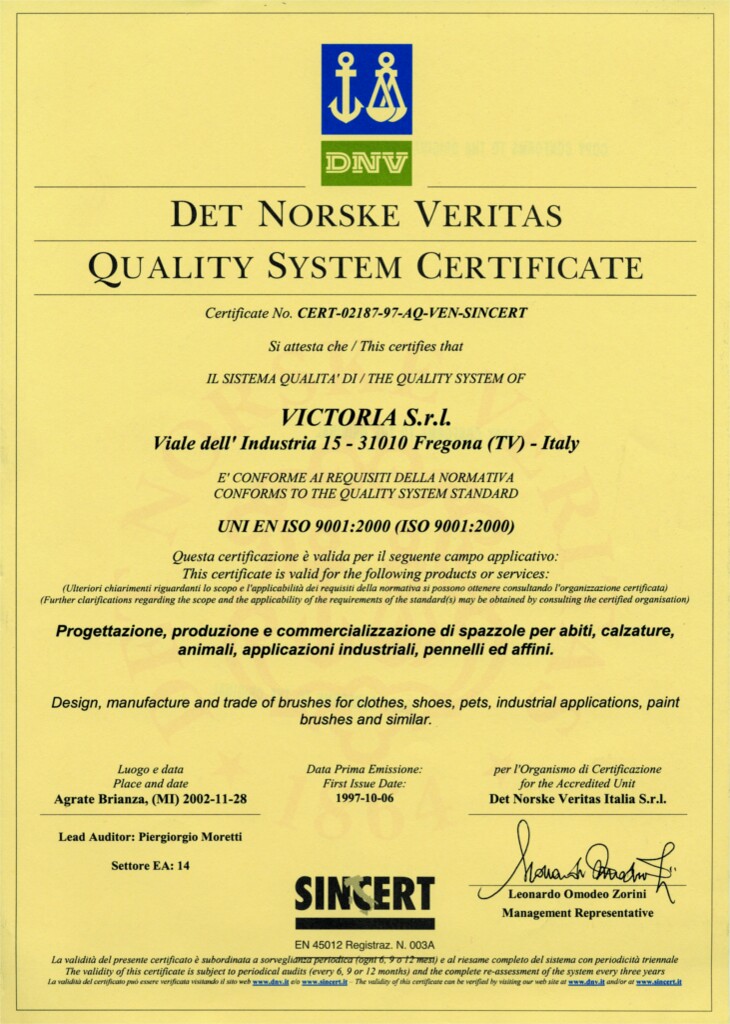 At the end of the eighties there was the entry into the company of Federico Perin who, having abandoned his career as a lawyer and after training experiences in primary insurance and financial companies, decided to take over the company from his father, foreseeing the possibility of success with the specialization in the brushes sector for shoe care and maintenance. The “Spazzolificio Victoria” then became VICTORIA SRL, investments were made in the latest generation machinery and little by little the Victoria brand began to be known in Italy and abroad, for the quality and functionality of its products.

1997 was the year of certification according to UNI EN ISO9001 and Victoria was one of the first Italian companies in the sector to obtain this important certification. Meanwhile, the expansion of the market abroad and towards more and more distant countries, the advent of new communication and marketing technologies, required new forces and so it was that in 2017, after graduating in International Relations at Alma Mater in Bologna, the third generation of the Perin family, in the person of Federica, joined the company.

Even today, after 100 years, everything goes back to simple gestures: the use of brushes is related to the hygiene, elegance and dignity of the individual and is lost in history making us think of an “always existed”.

Even ancient and simple tools such as brushes have evolved over time, changing in shapes and materials, without abdicating the taste of craftsmanship and despite being generated by an extremely modern production entity, able to compete with the challenges of globalization.

In this way, the quality generated by experience and the wisdom of tradition mediated by technological contribution resists over time.

This site collects anonymous statistical data on navigation, through cookies installed by authorized third parties, respecting the privacy of your personal data and according to the rules established by law. By continuing to browse on this site, you will give your consent or not, on the use of cookies.